I've been working on the under coat lately and more or less finished most of the leatherwork, barring the hems and the surface finish (I'll most likely paint it to make it look less suede). This si what I've got so far:

For the center back seam I had to help ease the leather with some water to flatten it enough to sew it down: 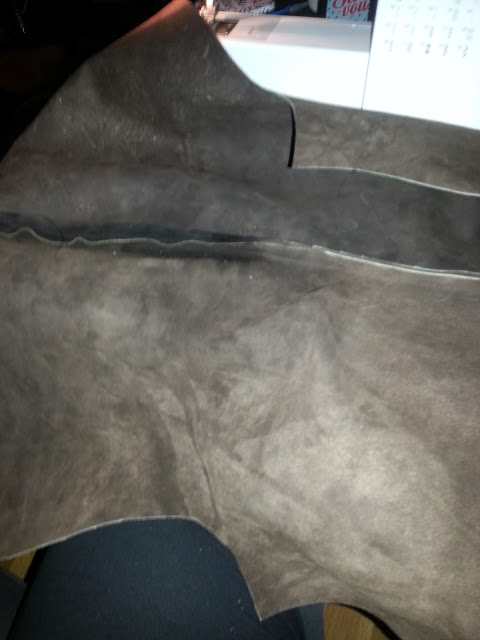 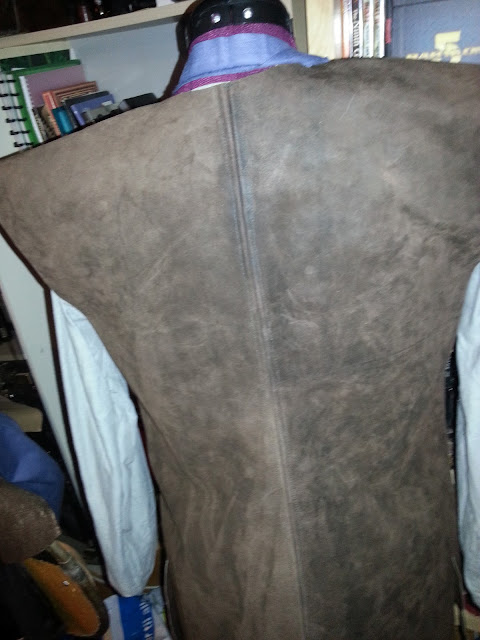 Front view (it still needs a litte cutting to adjust the front opening): 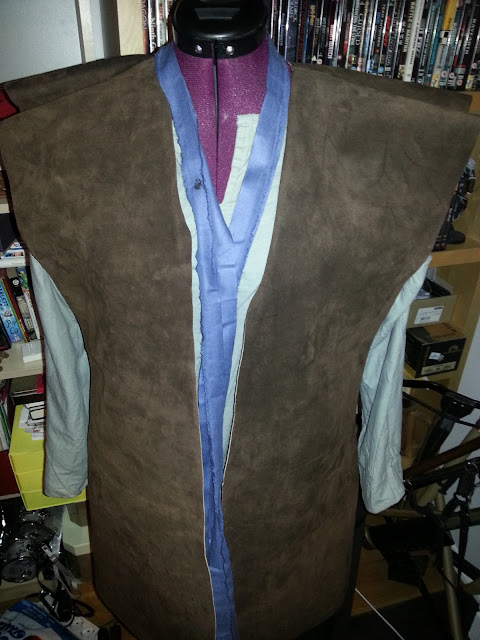 The shoulders turned out a lot more raised than the original and I'm pondering how to deal with it without affecting the mobility of the arms ... 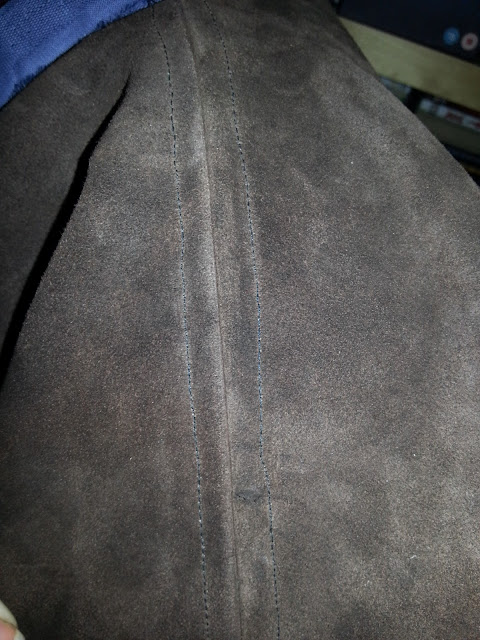 Not being able to go much further with the leather without a fitting first, I dived into the task of sorting out the beautiful, but painfully intricate trims. I've decided that I'll only be happy with the exact same pattern and it has to be embroidered, so there is no way around doing it all from scratch.

I started with some lengths of solid cotton canvas and begun the job of sketching up the pattern: 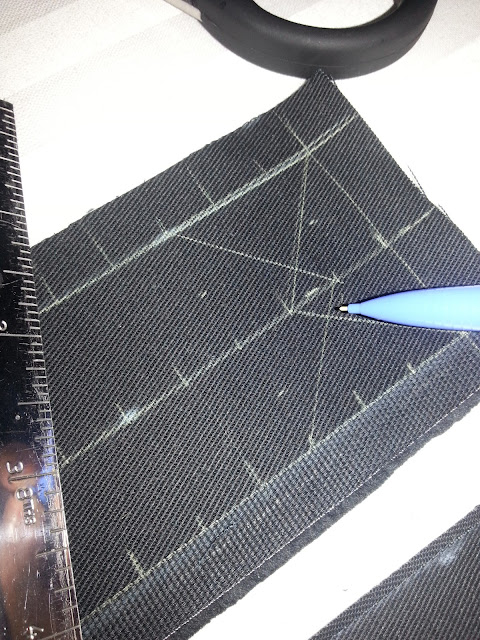 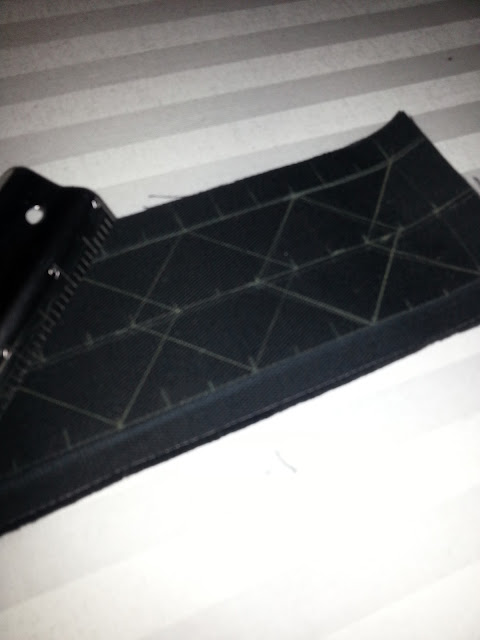 Havong finished sketching up the pattern, the next step was for the sewing to commence. 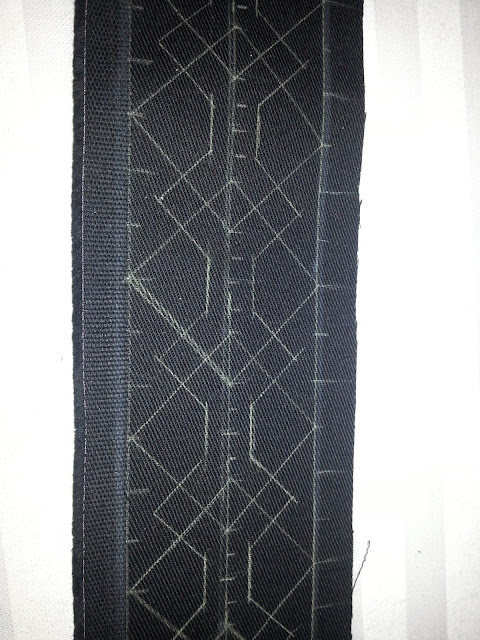 Having looked at the original trims the "zig-zag" pattern was sewn on first, so that's where I began: 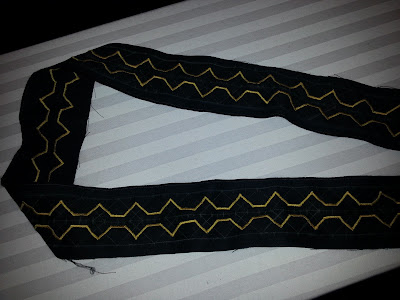 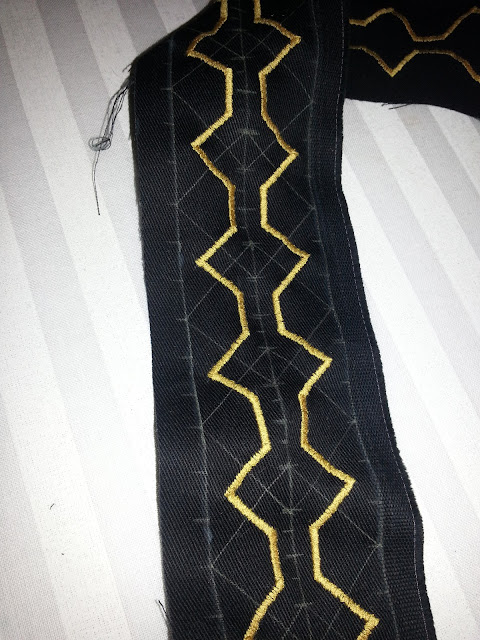 On the original pattern, the squares were sewn on thereafter, each overlapping the last (and because I'm a bit OCD when it comes to this stuff, that's how I did it. Unfortunately, I didn't have enough thread to finish it off, so the rest will have to wait until tomorrow, but I'm quite pleased with how it looks so far: 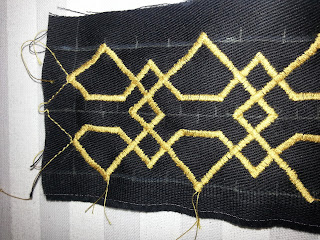 So, having made what I'd like to call a "first draft" of the blue tunic (I'll be doing a new one once I get hold of the right material, which I suspect to be linen, or wors, natural silk), I can start my work on the next layer; the under coat, or actually, as it turns out a leather vest with gambeson sleeves. Having done some research, and stumbling across this awesome blogpost describing both the making of a medieval gambeson and testing it gor it's usefulness in battle, I've decided to go for the layered method for the sleeves. However, I'll be using cotton rather than linen due to my budget. For the leather, I will use some more of the suede hides I got for a bargain price. I'm still not certain what to do with regards to the trims, but I suspect I'll be buying some wide velvet trims and simply sew the dwarven pattern on myself (just need to get thread with the right yellow/gold hue).
Here's what I've got so far:

I first cut out five layers of material, then aligned them all, stitching the top and bottom together. Turning them inside out, I ironed them so that the hems were all nice and neat. From there I started the work of sketching up the seams: 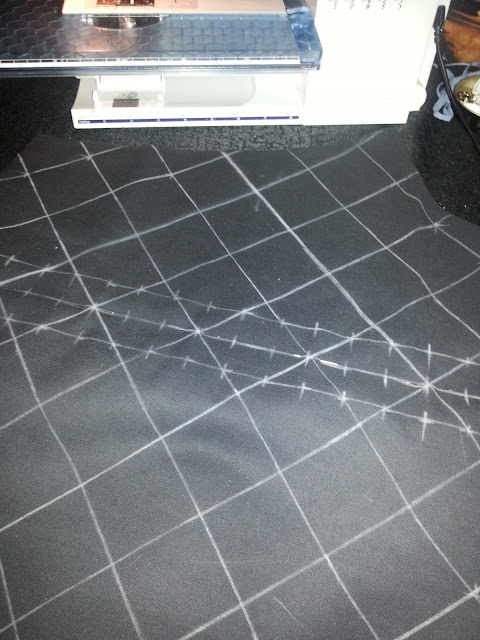 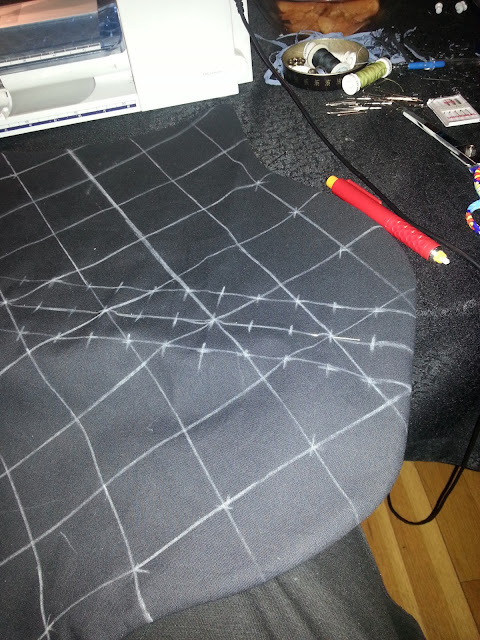 After the sketching job was done, I pinned all the layers in place: 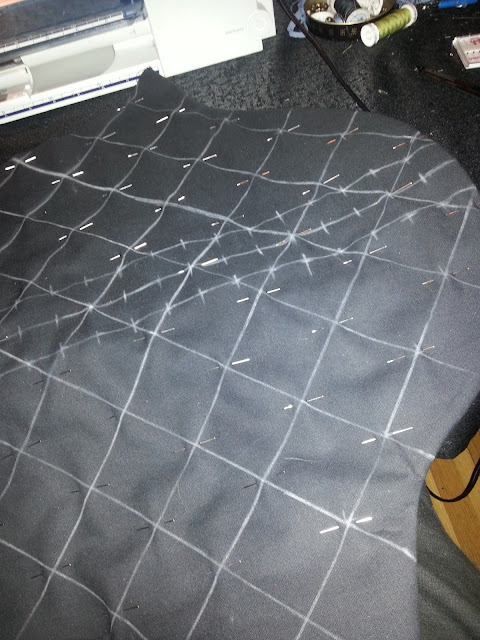 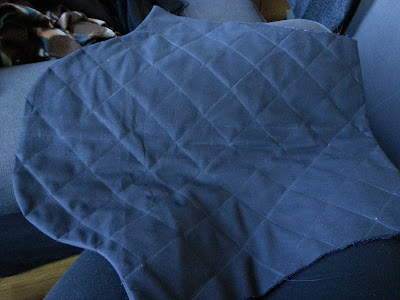 And when the last edges were sewn together, this is how it looks: 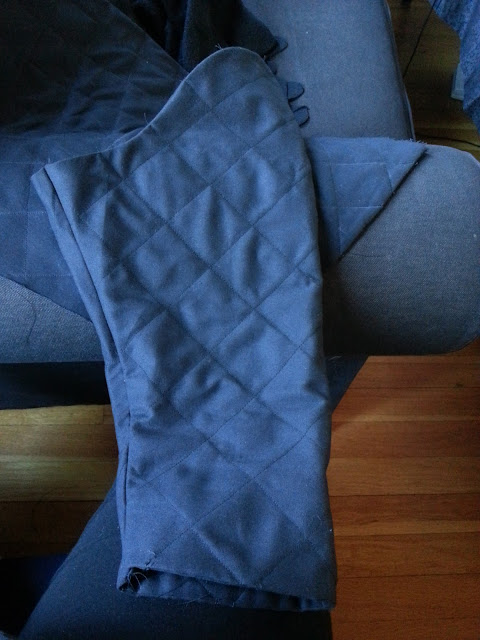 A it turnes out, these may be a little too tight and a little too short, so I'll probably have to redo them, which is why I didn't add the last vertical seams as seen on the original. However, this was a useful test run and I've learned a lot (and broken a lot of machine needles). From here, I will be moving on to the trimming and the leather.
Posted by Ingrid at 00:29 No comments:

I've really been focusing a lot on my music lately, which has put the Kíli Project a bit on hold, but yesterday, I got a little boost of inspiration as I read a blogpost by my lovely and talented  friend Therese (not only is she an excellent seamstress, make-up geek and generally delightfully nerdy, but she also has an amazing singing voice!) about her self-made Merida costume.

For the blue dress, she had used linnen, and the colour was perfect for Kíli! This obviously got me way more excited than anyone should be allowed to be about a bloody fabric, and I started interrogating her about it. Turns out, she bought natural coloured linen and dyed it herself, however, the perfect woad blue result she got was actually just a normal "stuff it all in the washer and see what happens"-dye.

Feeling very relieved at the fact that I might actually not have to go through the whole messy process of using natural dyes to get the right colour (I do still want to work with natural dyes at one point, but I'd rather it be for a project without a particular time limit on it), I'm really looking forward to pick up where I left! I will get back to you as soon as there is some real progress to write about! :)
Posted by Ingrid at 02:41 2 comments: